Welcome to the world of Masters of the Universe! The iconic cartoon series that has captured the hearts of fans for decades. And what better way to show off your love for the series than with the latest and most unique t-shirt design from OSOM - featuring the villainous Skeletor and his fierce companion Panthor.

Skeletor, the main villain of the series, is a powerful sorcerer and the ruler of the Snake Men. He is determined to conquer Castle Grayskull and become the most powerful being in the universe. His appearance, with his blue skin, white hair and skull-like face, is iconic and easily recognizable. Skeletor is a master of evil magic, and uses his powers to control the elements, teleport, and create powerful energy blasts. He is a formidable opponent, and He-Man and the other heroes of Eternia have to be always on guard when facing him.

Panthor, Skeletor's loyal pet and companion, is a fierce and powerful beast. He is Skeletor's right-hand man and often accompanies him in his battles. He is a purple panther with a fierce attitude, and his roar can be heard from miles away. He is a formidable fighter and is known to be able to take down even the strongest of opponents.

The 'In The Thrones' t-shirt design captures the dynamic duo sitting on the throne, ready to rule the pop-culture world. It is a perfect design for fans of the series, who want to show off their love for Skeletor and Panthor, and the Masters of the Universe. The design is unique and creative, and is sure to be a conversation starter among fans of the series.

Made from high-quality materials, this shirt is comfortable and durable, and is sure to last for a long time. So, why wait? Shop now at OSOM and unleash your inner villain in style! Show off your love for the series and for Skeletor and Panthor with this awesome t-shirt design. 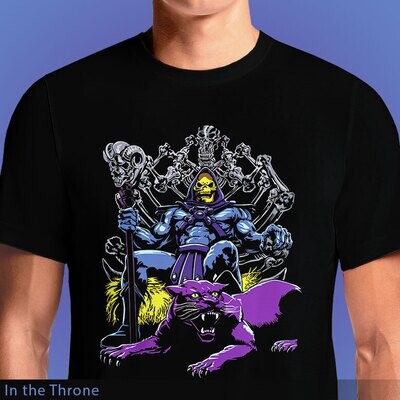